HFT - how does it work and is there a way to participate? - page 2 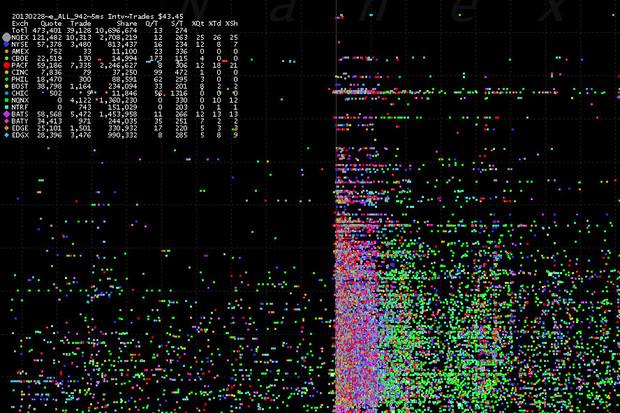 The nemesis of Wall Street’s high-frequency traders operates out of an apartment-sized office above the Bliss Salon -- manicure/pedicure $45 -- on Elm Street in the Chicago suburb of Winnetka.

Staring at four computer monitors,Eric Scott Hunsader, the founder of market-data provider Nanex LLC, looks for hints of illicit trading hidden in psychedelic images of triangles dancing with dots that represent quotes to buy and sell U.S. stocks broken down by the millisecond.

Charts of trading produced by Hunsader’s eight-person firm have captivated everyone from regulators to art gallery owners. One stunt involved a computerized piano piece mimicking quotes for an exchange-traded fund. He infuriates some traders, who say Nanex draws unwarranted conclusions and spreads conspiracy theories.

To Hunsader, the images created from market feeds are evidence of high-frequency trading firms exploiting market rules to turn a profit in a lawless environment. Though others in the industry see his reports and charts as propaganda, Nanex’s interpretations are helping to drive the public debate about the fundamental fairness of the modern stock market.

“You ever see ‘Lord of the Flies’ or read that book?” he said, using the William Golding novel about boys stranded on an uninhabited island as a metaphor for the stock market. “When you don’t have a parent around, things fall apart.”

This is what we are up against :

Virtu and Nanex had traded insults since Hunsader published a report on Sept. 20, two days after the Federal Reserve surprised markets by not reducing the $85 billion of monthly bond purchases it makes in its quantitative easing program.

Titled “Einstein and The Great Fed Robbery,” the report cited market data that it said showed some trading firm or firms got advance word about the Fed’s decision and then used the milliseconds-long head start to place bets totaling more than $1 billion. A millisecond is one-thousandth of a second, or three places to the right of the decimal point -- one farther out than how Olympic track and swim times are posted. Following the report, the central bank began a review and ultimately tightened the way it releases its statements.

HFT is not scalping. Many HFT use neutral strategy by provide liquidity to the markets.

Even I also want to know this...

Thanks for sharing this topic as it will help us to know and get new feedback from participant...

If you take the duration of average order HFT as a criteria, it is a scalping we shall never be able to achieve. Those are milliseconds that an order is opened and closed. If that is not scalping I do not know what is

What is high frequency trading or HFT? Put simply, HFT is when an institutional investor has a high speed algorithm that is programed to purchase a particular security, and within a millisecond, sell that same security at a fraction of a penny higher.

The original article : High Frequency Trading And Why The Average Investor Should Not Care - Forbes

Maybe helps somebody to understand what is going on

Sorry man, but that is totally wrong. Looks like you do not know what are you up against

Typicaly HFT strategies are automated algorithms that often are based on arbitrage strategies. Today there are a lot of platforms and dark-pools where trades can find arbitrage. Of course the arbitrage with a single currency pair EURUSD1 (from one source) and EURUSD2 (from another source) is not possible because it is too simple and there are many competitors for this pair. So to find the arbitrage you should to build sythetic currency chains from a number of pair, for example you can use EURUSD, USDJPY and EURJPY and try to arbitrate EURUSD1+USDJPY1 against EURJPY2.

Thanks for the info.