3
products
All
messages
In the beginning of the nineties I developed commercial stock market programs.
I have a very solid background as a professional programmer and a software architect having designed and implemented several commercial programs since 1980.

So I know how to program and all about market theory ;)
Now I am trying to get a big foot into forex...

How do forex prices move? (I just look on the smaller timeframes up to M5)
as waves - in trend direction up and down, or sidewards ;)
in jumps - on news
in spikes - on speaches, as we have some kind of real time interpretation/expectation

Concerning waves we find different types, depending on volatlity of currency or liquidity of the market for the currency.
At some point we can identifiy that a counter trend is starting and we have to reverse our strategy until we have again a trend.

So, to automate strategies we have to look for self adapting methods as there are no constant parameters.

The state of the market should be determined from short (M1,M5,M15), medium (M15,H1,H4) and longer term observations (H4,D1,W1).
On each time frame calculate an lower and upper bound and segment the range into several bands (more bands on longer time frames).
Depending where the price is located in the bands I see 7 states which could be calculated:

Partial exits in a trend (we never know what happens next, so let us protect any gains):
I uses a number of linear regressions lines as protective trend lines. Their periods might depend on the choosen currency and its volitility.
In a pull back of a trend, one of linear regression protective trend lines is hit and a partial exit out of the position is done.

I call this the "gear change method" ;-)

For example the EA uses linear regressions of period 50 (gear4 = the fastest), 100 (gear3) , 200 (gear2) and 400 (gear1).
If in an uptrend the price hits on ites way down the lr50, a fourth of the position is sold and the trend follower switches one gear lower.
If lr100 is hit, we switch in this example to lr200, and again sell another fourth of the original position size.
And so on.
So if lr400 is hit the position is closed. 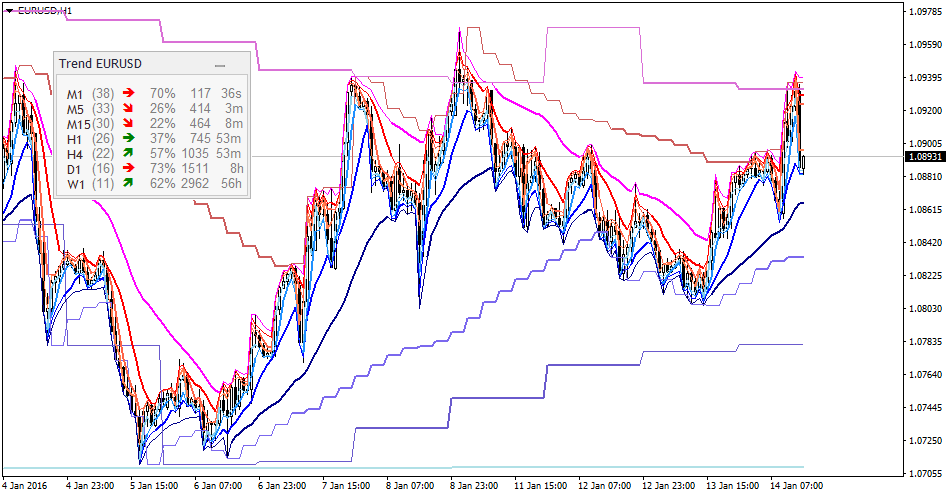 Uwe Goetzke | 2015.06.02
The PerfectBoundsTrend indicator shows very nicely the reactions as the bounds get hit.
https://www.mql5.com/en/market/product/9654 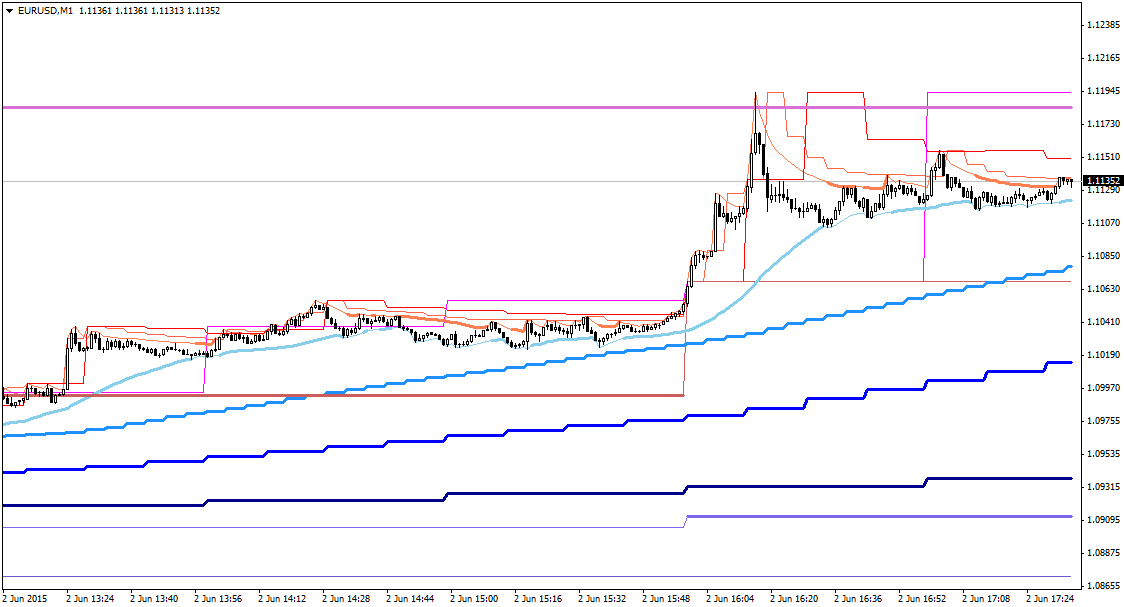 The PerfectBounds trend indicator is a new type of indicator based on the idea of catching the bounds of the trend formed by moving averages with periods up to 250. For the time frames M1, M5, M15, H1, H4, D1 and W1 the bounds are calculated: The upper bound is formed by the highest ma value of the price highs of each time frame (HMV and the determined period PMH). The lower bound is formed by the lowest ma value of the price lows of each time frame (LMV and the determined period PML). So if

The PerfectBounds indicator is a new type of indicator based on the idea of catching the bounds of the trend formed by moving averages with periods up to 255. The upper bound in green color is formed by the highest ma value of the price highs (HMV and the determined period PMH). The lower bound in red color is formed by the lowest ma value of the price lows (LMV and the determined period PML). A trendline is shown in the direction of the major trend. So if PML>PMH we have a downtrend and if