I have an existing MQL4 EA that I need to enhance.  The original EA was coded by a very good developer who is no longer available.

I need someone who will be able to understand the way the existing version works.   I have provided the following below:

I will supply the code to the original EA once I choose the developer to do the job.   If you are good I will use you regularly to code other EAs for me

I need someone who is experienced, has a good command of the English Language who can review and understand this information I provide make the changes I need.

To be honest the original developer did most of the hard work so this will be a pretty straightforward job for an experienced MQL4  developer who knows a little bit about trading.

Please do not apply unless you have a significant amount of experience and a good command of the English language.   I have already wasted my time on a developer who said he was up to the job but delivered a hot mess of an EA to test.

So further information is as follows:

1. The original EA specification used by the developer to develop version 1.0 of the EA

EA summed up in a few words.  I want an EA to accumulate positions in the direction I specify

So for example I want the EA to accumulate SELL positions on the US500 market at a gap of 10 points.

Then my luck changes and it starts to sell off so the 3 SELL positions remain open and eventually hit profit, it will open the next SELL position at 4466 (10 points from the first trade) then continues to move in my favour opens the next one at 4456 - then changes direction again, maintains all existing trades and doesn’t open a new sell trade until it reaches 4506 (10 points from 4496).

So taking the example above the trade structure would look like this: 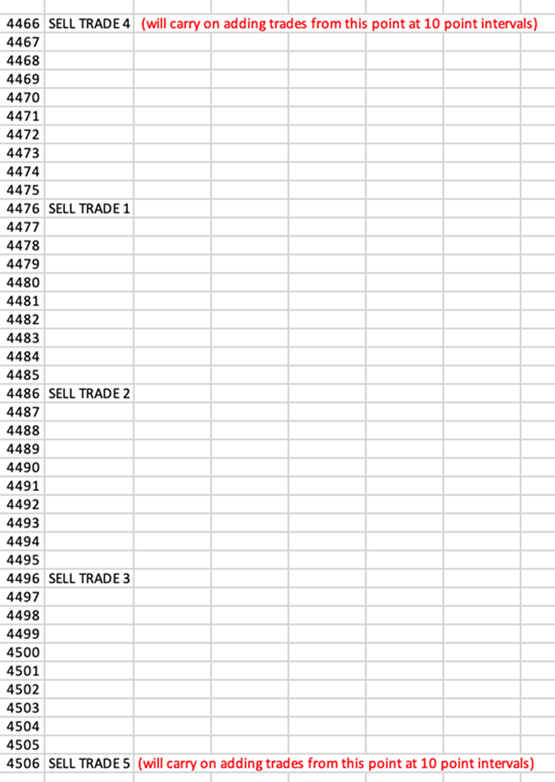 SETTINGS TO BE ADDED TO COMMENTS

SETTINGS TO BE ADDED TO SCREEN INFORMATION

2. The developers description of the solution he coded for me

A couple of pointers to make things clear.

The colored lines mark median entry levels for each side. Calculation is made so that commission and swap are factored in, so it works even if you'll hold positions overnight, too, because those will get updated based on data that comes from the server (current prices and costs), not only the entry prices.

From the reference levels the trailing will eventually kick in to lock in profit once the price goes beyond them. The colored dots show you how far that trigger point is from the median entry price.

It's configured so that the trigger is 2/3 of the gap, whatever you'll be setting that to. The reason is that if the price goes beyond the first order placed, before placing a 2nd one, it should secure the one behind first. If that ratio would be bigger (more than the gap), you may end up with more positions stacked one on top of the others in the direction of a monster move, without having them secured, only to have them implode equally sudden.

On bottom left you see how you stand at every moment. You get info about how many orders are active, on which direction, how heavy you're on every side and what the combined positions are worth on every tick.

You may choose from more than two (as specified) scenarios. You may trade one side only, both sides or neither of them. That may come in handy in the event you want to NOT enter any more trades on a particular direction and wait for them to close. Parameters may be changed on the fly. Default is "None", so make sure you change that while testing, otherwise you won't get any trades. It's not such a big head-scratcher, but you never know...

Other than that, everything else is pretty much self explanatory.

Let me know how it goes.

3. The changes I need 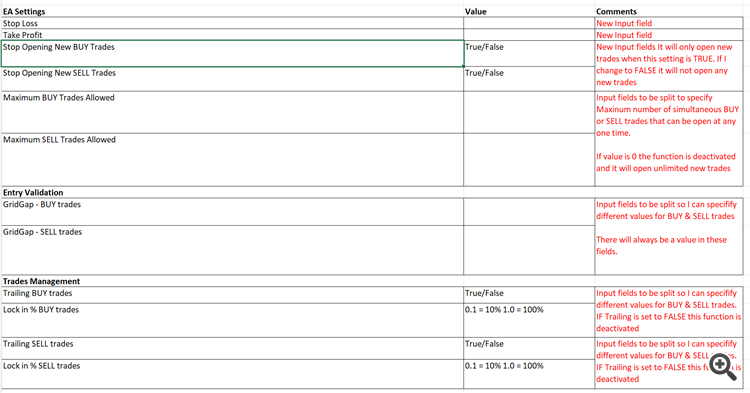 Please let me know if you have any questions.

1
Developer 1
Rating
4.63
(187)
Projects
327
41%
Arbitration
135
14% / 43%
Overdue
121
37%
Loaded
2
Developer 2
Rating
4.86
(21)
Projects
29
3%
Arbitration
8
50% / 0%
Overdue
2
7%
Loaded
3
Developer 3
Rating
0
Projects
1
0%
Arbitration
0
Overdue
0
Loaded
Similar orders
Clean up and fix EA MT4 40+ USD
Hello. I need to clean up the code of an EA. There are some things to delete , some to be remade better and above all, errors to fix . Errors are two: 1) The EA gives an error in live trading, in backtesting not, but in live it gives sometimes the error "Order failed - Invalid TP/SL" , and when this error happens the order is not opened. Some say that is because the Stoploss and TakeProfit are too small, but I tried
I need a tradingview pine script strategy converted to mql4 EA 30 - 100 USD
I have a trading script I wrote in Pine Script that I need converted to MQL4 EA. In addition to the conversion I want to add a few features to the strategy. I need the EA to back test a certain user defined time period (i.e 2 Years) and only give a buy/sell signal if the percentage win rate is over a user defined percentage if possible. I need to get an app alert/email alert for buy/sell signals with their buy/sell
Development of an expert advisor to trade news events 30+ USD
Hello I'm in need of a programmer who can build an EA to trade news events. The following are the requirements: Time for the event( I must be able to set time for the news event) e.g. 14h30 Trades must open 10 seconds before the event( The time in seconds must be adjustable) e.g. 14:29:50 Adjustable lot size An option for multiple trades It must have an option to choose between BUY and SELL Take profit in pips (must
An Expert Advisor WIth Fibo and Dow Theory 70% Winrate 50 - 100 USD
I,ve just backtesting my trading system with dow thery and Fib retracement to get entry position, Take profit with 1:2 risk reward ratio. my trading rules is describes technically below: Entry Triggered Limit Pending Order Exit wait for 38,2 at bullish/bearish Close Order With 1:3 50-61,8 medium buliish/bearish (MEAN) Close With 1:2 61,8-88,6 at Sideways Market (MEAN) Close with 1:1,5
MT5 HEDGING ROBOT 30+ USD
i want simple hedging robot using mt5 platform. and trading currency name is volatility index pair. and order type is pending. and include this setting 1 profit target pip 2 recovery zone gap size 3 auto lot increments(lot 0.2$ , 0.4$, 0.8$,1.6$,3.2$,6.4$ ) 4 start lot size. and robot first open trade is ( buy trade)and when closing all deal re open order is (buy trade)
MT4 EA with Multi Timeframe Moving Average 30 - 200 USD
I need an EA which opens a position if: 1. A fast MA crosses a slow MA 2. This needs to be valid for Multi Timeframes (so open the position only if M5, M15, M30, H1, H4 are on the same direction) 3. The Tradingtime needs to be adjustable (Only trade within a specific time period) 4. The Moving averages should only provide a signal after the candle is closed
I need someone to adjust my EA 50+ USD
I have already an EA it is working sometimes and sometimes has problem not working correctly. The developer before did a mess, i need someone to adjust it. The robot is already done I need someone to fix the problem
Modify existing EA 30+ USD
Demand supply EA sometime enter in trades sometime not ( strategy is candle close after retouch , i think EA enter on candles which retouch zone and inside zone.. while i want count anything ... when retouch and bullish candle closed.. EA should enter in trade ...( like bearish /bullish engulfing ) find error why miss some trades 2nd add strategy when price just retouch zone . not candle close.... TP /SL /BE /
Upgrade EA 30 - 600 USD
I have a harmonic scanner EA and a separate indicator system that I would like combined into one EA. I will provide the files once the right developer contacts me
Add a 200 MA/EMA (modifiable) to existing EA 55+ USD
I need my EA to only trade buys when above the MA/EMA and only trade sells below. Need a modifiable setting that allows me to change the settings. Looking to do this ASAP