New article The Channel Breakout pattern has been published:

Price trends form price channels that can be observed on financial symbol charts. The breakout of the current channel is one of the strong trend reversal signals. In this article, I suggest a way to automate the process of finding such signals and see if the channel breakout pattern can be used for creating a trading strategy.

Equidistant channels are shown in the below chart. Descending channels are marked with red lines, an upward channel is shown in blue. Drawing of a descending channel starts with the upper channel border, which determines trend based on the highs of price fluctuations. The lower border is built on price lows parallel to the upper one. The lower border can be drawn at the maximum or average deviation. The construction of rising channels is opposite: the lower border is drawn first, and then the upper one is plotted. When drawing a sideway channel, we should pay attention to the previous trend, because flat price fluctuations often act as a correction to the previous movement, which may continue after the flat period. 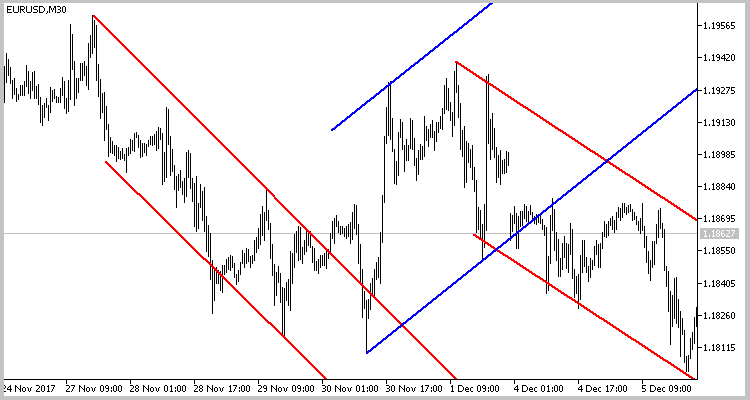