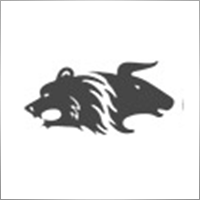 Data on Initial Jobless Claims for the week is due at 3:30 pm (GMT+2). The index represents the number of new unemployment claims. Published weekly on Thursdays. Allows estimating the upcoming Nonfarm Payrolls figure. A fall in the index strengthens the USD. A growth in the index weakens the USD.

Data on the Durable Goods Orders is due at 3:30 pm (GMT+2). In October, the index is expected to grow from -0.3% to 1.5%. Represents the value change for durable goods (including transportations) that last for more than 3 years. A growth in the number of orders is considered positive for the economy. A fall in the number of orders represents a slowdown of the economy. A high reading strengthens the USD.

The FOMC Minutes are due at 8:00 pm (GMT+2). The committee gives their opinion on current economic conditions in the US and decides on the direction of monetary policy. Has a high impact on the market.
Share on social networks

Reserve Bank of Australia Deputy Head Kent's Speech is due to 09:45 (GMT+2). Christopher Kent is Deputy Head of Economic Analysis Department of RBA, Economic Assistant Governor. His comments can lead to the growth of the AUD volatility.

All Industry Activity Index. Japan, 6:30 am

The All Industry Activity Index is due in Japan at 6:30 am (GMT+2). The index represents expenditures of large manufacturers in all sectors excluding the financial one. It is a leading indicator of productivity growth. Generally, an increase in the index strengthens the JPY, while a fall weakens the JPY.

The Producer Price Index for October is due in Germany at 9:00 am (GMT+2). The indicator is expected to be up from -0.2% to 0.2% in monthly terms and from -1.4% to -0.9% in annual terms. The index represents the wholesale prices change from producers. A growth in the index strengthens the EUR. A fall in the index weakens the EUR.

The CB Leading Indicator for October is released in the US at 5:00 pm (GMT+2). It is the weighted index of all major indices, amongst which are jobless claims, durable goods orders, consumer confidence, major stock share prices, and building permits. The indicator estimates economic conditions for the next 6 months and has a limited impact on the market. Negative values for three consecutive months indicate economy slowdown. A growth in the index supports the USD. Published monthly.
Share on social networks 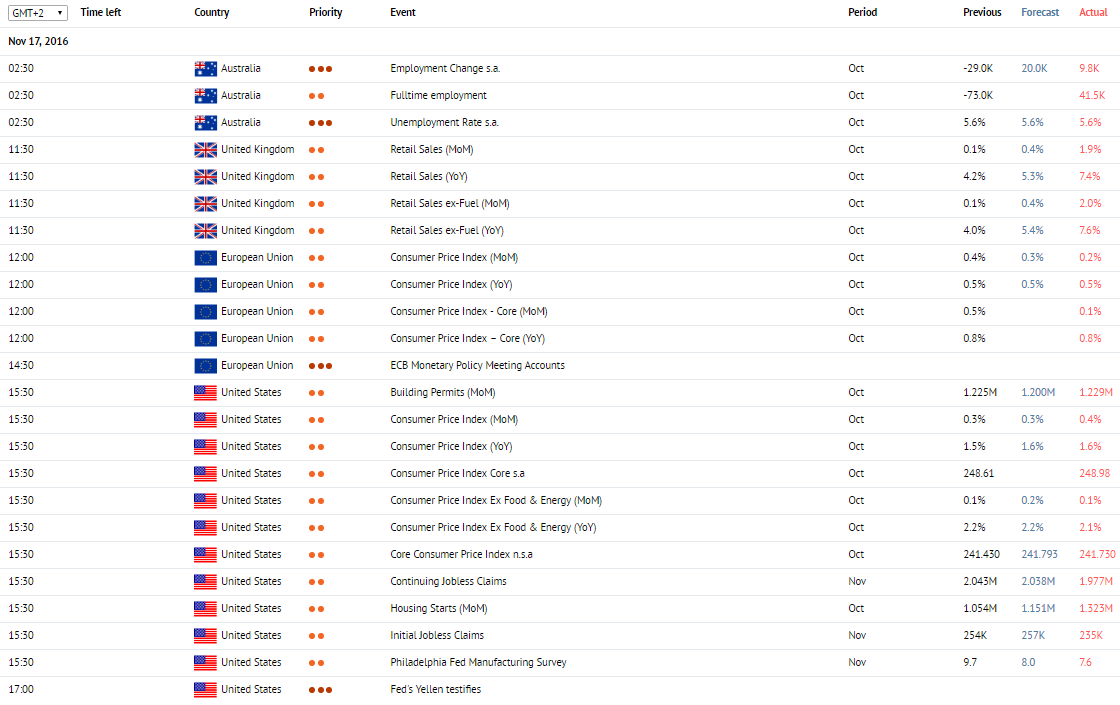 At 02:30 (GMT+2) the unemployment rate data will be published in Australia. It is predicted that figure will remain the same at the October level of 5.6%. The indicator shows the percentage of unemployment citizens of the total number of the labor force. Its growth is considered to be a precipitating factor for the country’s economy, also it weakens the AUD. The falling of the figure shows economic growth and strengthens the national currency.

At 02:30 (GMT+2) the employment rate data will be published. It is predicted that this figure will be negative (-9.8K) in October against a September positive one (20.0K). The indicator shows the number of newly employed citizens in Australia. The growth of the index strengthens the AUD, decline weakens the currency.

At 11:30 (GMT+2) retail sales data will be published in Great Britain. It is predicted that the MoM figure will grow up to 0.4% in October from 0.0% a month earlier. YoY indicator is also expected to grow up to 5.3% against the previous level of 4.0%. The indicator is based on the total number of bills in retail shops and shows the consuming spending and demand level. The sales’ growth is the key factor in economic development. High rate has a positive impact on the economy and strengthens the GBR, as the low rate weakens it.

At 12:00 (GMT+2), Consumer Price Index will be published. It is predicted that MoM figure will fall down to 0.3% in October from 0.4% a month earlier. YoY indicator will remain the same at the level of 0.5%. CPI is a key indicator of inflation in the Eurozone and reflects the change in the value of the basket of goods and services during corresponding period. The growth of the index strengthens the EUR, decline weakens the currency.

At 14:30 (GMT+2) Meeting Minutes of the ECB's monetary policy will be published. Account of the monetary policy meeting contains an overview of the current economic situation, commentaries on the recent monetary policy decisions and macroeconomic and inflation forecasts.

At 15:30 (GMT+2) primary applications for unemployment benefits will be published. It is expected that the figure will rise up to 259K per week from 254K the previous week. The indicator reflects the number of new applications for unemployment benefits, and is published on Thursdays every week. It gives an idea of what will be the rate Non-Farm Payrolls. The decrease of the number of applications is a positive factor for the US dollar. The growth of the claims, on the other hand, is perceived as a negative factor.

At 15:30 (GMT+2), Consumer Price Index will be published in the US. It is predicted that YoY figure will rise up to 1.6% in October from 1.5% a month earlier. CPI is a key indicator of inflation in the country and reflects the change in the value of the basket of goods and services. The growth of the index strengthens the USD; decline weakens national currency.

At 17:00 (GMT+2) Fed's Janet Yellen will make a speech. Ms. Yellen will report to Congress on the current economic situation. After the speech, she answers questions from congressmen. The speech can cause a surge in volatility in the market.
Share on social networks

Industrial production data is due to 19:15 (GMT+2). MoM index growth from 0.1% in the last month to 0.2% in October is forecasted. This index shows USA production level and is one of the main indicators of the national economy state. It has much influence on the market. Growth of this index strengthens national currency and lowering leads to weakening of it.

Capacity utilization data is due to 19:15 (GMT+2). MoM index growth from 75.4% in the last month to 75.5% in October is forecasted. This index shows the percentage expression of productive capacity utilization of the country’s economy. It shows economic growth and level of demand. The optimum index is around 85% and shows a good balance between economic growth and inflation. Values greater than 80% leads to intensification of the inflation in the country. Growth of the index has a positive impact on the national currency in general.
Share on social networks

At 05:30 (GMT+2) Meeting Minutes of the Reserve Bank of Australia will be published. Minutes are published two weeks after the decision on the interest rate and contain comments on the decisions taken. The minutes also record information about the votes of individual members of the Monetary Policy Committee.

At 14:30 (GMT+2) consumer prices index will be published. It is predicted that the annualized rate would rise to 1.1% in October from 1.0% a month earlier. The indicator is based on the total number of checks for purchases at retail stores and characterizes the level of consumer spending and demand. The increase in sales volumes is an important factor of economic development. High value has a positive impact on the economy and strengthens the GBP, low value weakens national currency.

At 15:00 (GMT+2) data on gross domestic product will be published. It is predicted that the figure for the third quarter will remain unchanged at 1.6% in annual terms. The indicator shows the value of all goods and services produced in the Eurozone for a certain period. High result strengthens EUR; low result weakens European currency.

At 18:30 (GMT+2) data on US retail sales will be published. It is expected that in October the rate will remain unchanged at 0.6% in annual terms. The indicator of consumer spending shows the change in sales volume in the retail trade. The growth of the index is a positive factor for the national economy and contributes to the strengthening of the USD, decline weakens the dollar.
Share on social networks

At 04:00 (GMT+2) data on retail sales in China for October will be released. This is an indicator of consumer spending and reflects changes in sales volumes in the retail trade. The growth of the rate is a positive factor for the national economy and contributes to the strengthening of the CNY; decline weakens the national currency.

At 04:00 (GMT+2) data on industrial production in China for October will be published. The indicator shows a change in output in the Chinese industrial sector. It is one of the main indicators of the state of the economy. The growth of the rate strengthens the CNY; the low value of the indicator weakens CNY.

At 12:00 (GMT+2) data on industrial production for September will be published in the Eurozone. The indicator shows the change of production volumes. It is one of the main indicators of the state of the economy. High results strengthen EUR; low values weaken the EUR.
Share on social networks

BoC Governor Poloz Speech is due at 4:50 pm (GMT+2). Steven Poloz is the Governor of the Bank of Canada and the Chairman of the Board of Directors of the Bank since June 2013. Giving commentaries regarding current economic conditions in the country and monetary policy. Depending on the tone of his speech, his comments can either strengthen or weaken the CAD.

The Michigan Consumer Sentiment Index is due at 5:00 pm (GMT+2). According to forecasts, in November the index will grow from 87.2 to 89.5 points. The index is calculated by experts from Reuters and the University of Michigan. Represents readiness of consumers to spend money in current economic conditions. A high reading strengthens the USD. A low reading weakens the USD.
Share on social networks

At 21:00 (GMT+2) the monthly report on the status of the budget in October will be published. The indicator shows the difference between the government revenue and expenditures. The budget deficit appears when expenditures exceed revenues. When the opposite happens, the budget is said to be in surplus. Positive values strengthen the USD, and negative values weaken the USD.
Share on social networks

The Consumer Price Index for October is due in China at 3:30 am (GMT+2). The indicator is expected to grow from 1.9% to 2.1%. The index represents the change in prices for goods and services for households. It is the key indicator of inflation. A moderate growth in the index strengthens the CNY. A fall in the index weakens the CNY.

The Reserve Bank of New Zealand releases its Monetary Policy Statement at 10:00 pm (GMT+2). The Monetary Policy Statement provides information on how the regulator proposes to achieve its targets, how it proposes to formulate and implement monetary policy during the next five years and how monetary policy has been implemented since the previous Statement was released.
Share on social networks
12345678910111213141516...30