I want the market to follow the direction of the prices and once a price position is achieved, the position will revert back to take an opposite bid. So at the beginning for example, all prices above the yellow colour will be Buy and all prices below will be sell.

The EA will have variables as starting position prices, which will be determined by me, variable gap positions which will help predict every price above and below the predicted start positions. An example of my Monthly template design is below 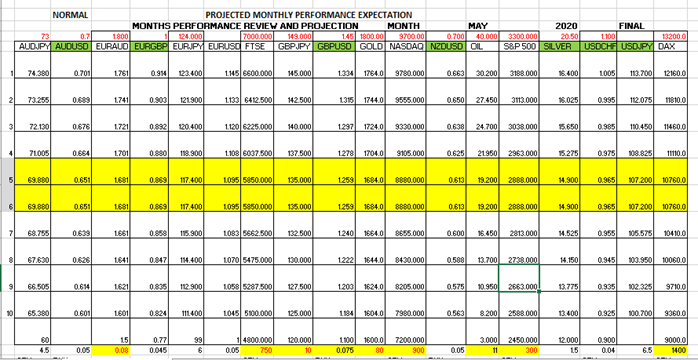 The above position is usually determined before end of previous Month. After the new Month Commences or at the activation of the EA, it will run for the whole Month using the figures computed above. 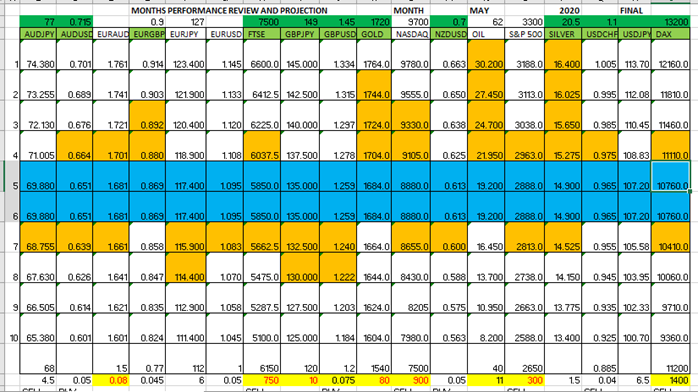 The Orange coloured positions above shows which of the bids have been activated in the course of the Month of review.

The above products have 3 scenerios which will be identified as follows:

Price started at 69.88 and moved down to 68.755 and moved back up again. So if 68.755 activates as a SELL, then bid prices at 69.88 and above will reactivate at twice the pip size of the previous bid position. If Price moves down to 67.63 for example, then 68.755 will activate a BUY but at a normal lot size until it reaches the middle price where it will activate a double lot size.  Prices should activate an opposite bid if it has achieved a 60% gap position to reactivate an opposite bid.

Price started at 1684 and moved to a low of 1665. Which supposed to have activated a SELL assuming price reached 1664 and moved back up. As a result, as the price moved down and went upwards the bid will activate a BUY from 1684 upwards. For every position at the top the price activates, it will activate the opposite bid as set by the rule after a certain gap is achieved in the course of the move.

The settings should be as follows

EG if I have a gap size of 1 and a start price of 10, then it will set up 4 prices at the top and 4 prices below as follows:

Everytime a bid activates from either side of the position at every start period, ie whenever the start price is changed, then the first side the market goes will be at normal lot size set at the beginning of the period, while the opposite side bids will be made at twice the lot size. So in the example above, once 11 activates at say .01 lot size, and current price at 12.5, then 11 and 10 will activate a SELL at .01 and 9, 8, 7 and 6 will activate a SELL at .02.

So the start line becomes a support and resistance position especially once the market activates a first bid at the top or lower position of the line.

I will be needing at least 15 working days to test the EA initially at the end of project before we close the payment on the site. After which I will still need 60 days to be able to properly test the EA and revert back in case I have any issue at no cost.

I will be needing the code at end of the project.