The key theme on the gold price chart are the two trading ranges since gold’s all time highs. One trading range started end of 2011 and lasted till early 2013, the second one is still in play. In technical terms, both trading ranges took the form of a descending triangle. 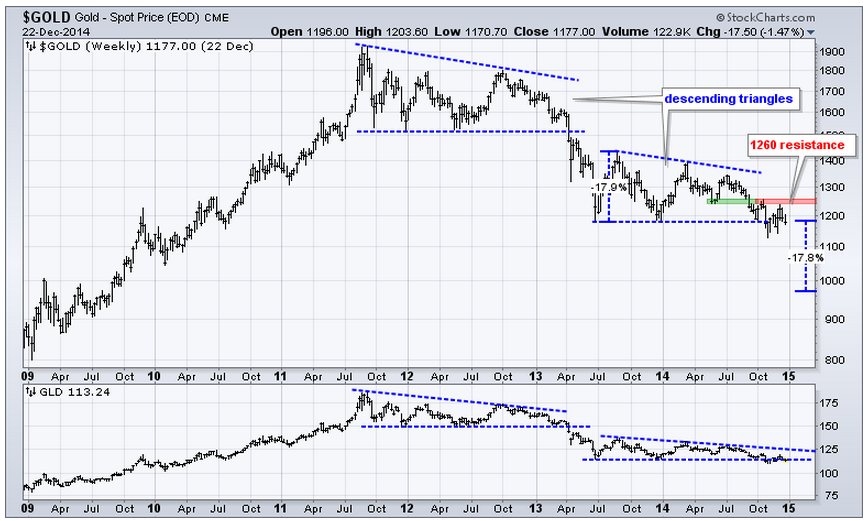 Bullish forecasts and predictions for gold in 2015

Earlier this year, gold analyst Ronald-Peter Stoeferle released its gold price model for 2015 and beyond. Based on weighted probabilities, his model shows a long-term gold price of USD 1,515 per ounce. The distribution of gold price expectations remains positively skewed as evidenced by the following chart. Therefore, should there be a deviation from the currently widely expected path towards stabilization of the central banks’ balance sheet, significant upside potential for the gold price would result. 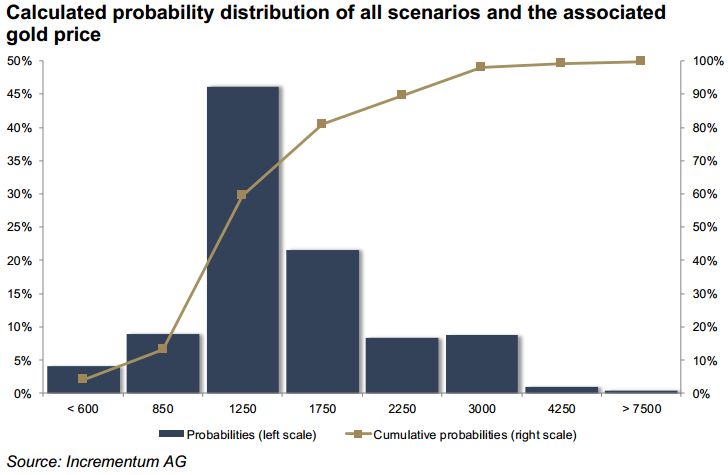 According to George Gero of RBC Capital Markets, gold is set to reverse its trend in 2015. During a CNBC interview for “Futures Now” he observed: “The decline from the $1,900s down to the $1,150s is a major decline, and it was reflected by all the funds fleeing gold and running into better-performing assets, whether it’s equities or debt, and that’s been continuing. In 2014, gold hasn’t been helped by the dollar’s rally. The greenback has shown serious strength against other currencies, which has reduced gold’s attractiveness. After all, since gold is priced in dollars, an increase in the value of a dollar means a decrease in the value of an ounce of gold. Additionally, since people buy gold to hedge against potential inflation, ebbing inflation fears dull gold’s appeal.”

Gero acknowledges that the sell off in crude is anti-inflationary—so the people that have been looking for inflation haven’t really found it. But he adds that “now you’re going to see some changes based on all the stimulus in Europe, in China and in Japan.

Jeffrey Nichols, Senior Economic Advisor to Rosland Capital, says that 2015 promises to be a good year for gold investors. While the near-term price outlook remains uncertain, he feels fairly confident that gold will be considerably higher at this time next year – and on its way to new historic highs in the years ahead. He sees the following drivers. U.S. economic performance and monetary policy is key – but under almost any economic scenario, he sees gold appreciating. Wall Street’s booming stock and bond markets have been tough competitors to gold but he expects a dose of realism and a substantial correction on Wall Street will reverse the flow of investment and speculative funds away from stocks and bonds back into gold. He also points to the insatiable appetite for gold in China, India, and other East Asian markets. Last but not least, a growing number of central banks will continue buying gold.

Neutral or bearish forecasts and predictions for gold in 2015

BMO Chief Economist Doug Porter warned that interest rates could move higher sooner rather than later in 2015. His 2015 outlook for gold is that it will trade, broadly speaking, where it is today. His assumption for next year is $1,190 per ounce. If the market perceives inflation is becoming a concern, it would be constructive for the gold price.

Erica Rannestad, senior analyst, precious metals demand, Thomson Reuters GFMS, agreed that gold prices will likely be lower in the first half of the year because of the Fed’s expected action, which she called “the top driver” for gold-price direction. She said gold prices will likely consolidate in 2015, and lists and a 2015 average price $1,175, with prices trending higher in the second half of the year.

Rob Haworth, senior investment strategist, U.S. Bank Wealth Management, said the following: “Looming Federal Reserve interest rate increases in the second half of 2015 and the stronger U.S. dollar will keep pressure on gold prices through the year. The gold market could see rallies if demand improves for physical gold, but weaker growth in much of the world will temper such prospects.”